How to buy high-quality nutmeg straight from Kerala’s plantations?

Spice up with Nutmeg

Remember the oval-shaped nut-like spice that your grandmother used to ground and spice up your dishes? Nutmeg is derived from the fruit of the Myristica fragrans tree. The fruit is covered with a bright red-yellow webbing sort of covering called the mace. Mace is in itself another much-loved spice. Nutmeg is actually a seed (kernel) of the fruit. As a spice, it is pleasantly aromatic and piquant. Once the nutmeg kernel is dried and ground into a powder it is added to food for delivering its special flavor. Nutmeg is also widely used in traditional medicinal preparations. Nutmeg once well dried, can be grated and used when required.

One may think that nutmeg and mace may have the same taste and flavor. But that is not so! Mace has a similar odor and flavor but it is spicier. Nutmeg is nuttier and has and more refined flavor. One can feel it to be a sort of combining the piquancy of cinnamon and pepper but though not the same in any way. Nutmeg is also spicier and feels like a combination of pepper and cloves. The taste and feeling are subtle and is of course a subjective experience. However, most people prefer nutmeg for its more delicate flavor. It is easier to add it to almost anything as it can be ground into a fine powder. 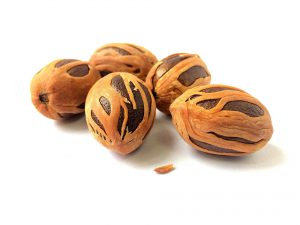 The best nutmeg can be accessed directly from Kerala where it is a plantation crop. The nutmeg trees are grown interspersed with fruit trees and can even be found in the backyards of homes in the hilly regions of this State in India. The nutmeg that you buy from Spice Munnar would have been sundried at least for one and a half months. This is required for it to become hard so that the outer covering of the kernel can be broken to liberate it. The Mace is usually separated much earlier and sold even before the nutmeg is fully ripened.

Nutmeg finds a perfect home and climate in Kerala with its rich soil and two seasonal monsoons. The trees can grow to 50 ft and fruits ripen and split to reveal the central kernel. The air fills with the sweet aromatic smell of nutmeg in these plantations. Nutmeg was a treasured spice and had led to many colonial conquests and fights to monopolize the trade. Nutmeg was initially grown in Kerala experimentally as an exotic spice and it was later understood that the trees grew well and produced a good quality crop that was highly-priced. 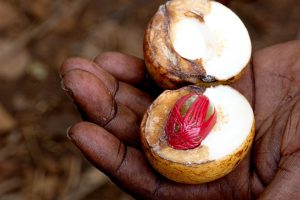 Storing nutmeg is no different from how you store other spices. It is preferred that it is kept in a cool, dry place away from direct sunlight in your kitchen. Nutmeg kernels can safely be stored for many years. However, if you ground it, it should be used immediately for the best effect. Grounded nutmeg is nutty and spicy. It can hold its flavor for a couple of months and more but it should be stored right and airtight in a glass container. It is best to use nutmeg in smaller than recommended quantities in the recipe because you will find that the piquancy and flavor of fresh nutmeg from Spice Munnar will be much higher. Nutmeg can be used for making pastries and sauces. It can be used in salads and curries. It is used for making pies and cakes, donuts, and savory dishes. You can access all sorts of spices from SpiceMunnar including cloves, allspice, cardamom, mace, black pepper, mustard, turmeric, and more.